Rhythm is important. This helps the person receiving understand. Speed will only come with practice as it is important for the mind to understand what it hears without question. Always write in longhand, as soon as you start learning, as once you are receiving at a reasonable speed it is difficult to write fast enough in capital letters. Start as you mean to go on.

The length of a dot is one unit of time.

The length of a dash is three units of time.

The space between parts of the same letter is one unit of time.

The space between letters is three units of time.

The space between words is one seven units of time. 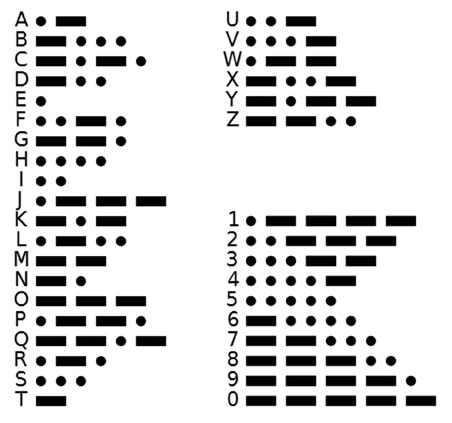 This is what the RSGB have to say about morse code

If you think operating in Morse Code is something that belongs to the past century, think again! Morse operation remains a popular mainstay of amateur radio and it continues to attract new interest.

Morse code lies at the very origins of amateur radio.

Morse is still used outside of the amateur radio world. In aviation, for example, the identification letters of navigation beacons are sent in Morse.

Morse can be very useful for emergency communications, as an intelligible message can be sent under operating conditions that would make a voice call impossible, and the simple technology involved means equipment can be improvised if necessary.

Read what Wikipedia have to say about Morse Code

The Radio Society of Great Britain issue a certificate of competency in morse code at no charge. Click here for details.

Most radio amateurs enjoy sending and receiving QSL cards and most will also send one to short wave listeners who confirm their signal strength and readability. See some examples of printed QSL cards